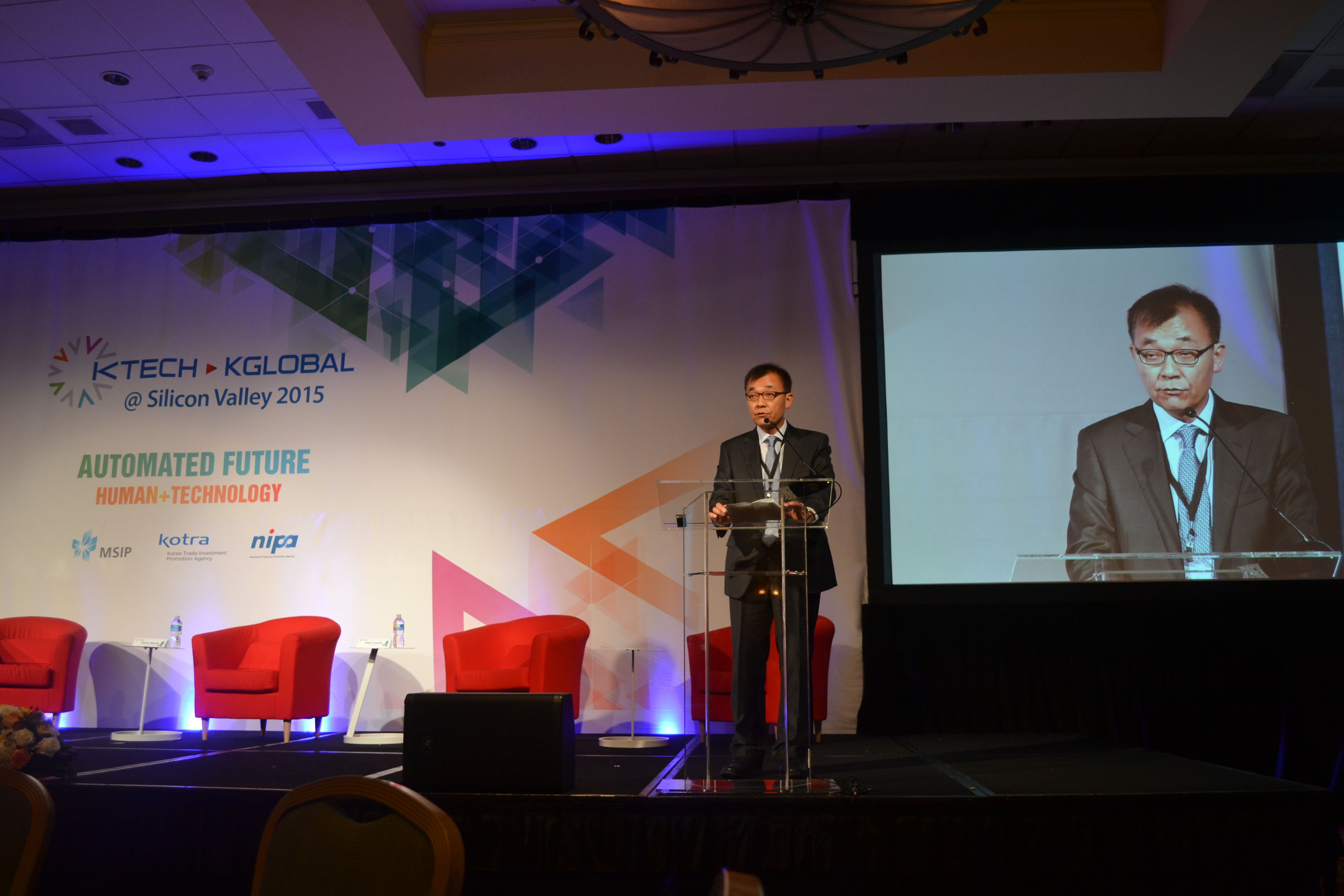 The two-day KTech – KGlobal@Silicon Valley 2015 symposium and expo organized by the Korean Ministry of Science, ICT & Future Planning along with KOTRA Silicon Valley; was dedicated to promote Korean technology and its ties with Silicon Valley. The event took place on November 12-13, 2015 at Marriott hotel in Santa Clara, CA. The opening remarks were delivered by Yong Soo Kim, Assistant Minister of Science, ICT and Future Planning, ChangYup Na, Managing Director of KOTRA in Sillicon Valley, Jong-Lok Yoon, President of National IT Industry Promotion Agency, Congressman Mike Honda from 17th District of California and Dongman Han and Consul General of Republic of Korea in San Francisco.

The main theme of this year event was “Automated Future: Human + Technology”.

The first keynote speaker Curtis Sasaki, Vice President of Ecosystems and IoT General Manager from Samsung Electronics stated that in 2020 many of our devices will be connected. Sasaki who worked in the past at Apple and Sun Microsystems, and today at Samsung, the most recognizable brand from Korea, described some effort and the products that company offers: Samsung Sleepsense, the sleep monitor, Samsung Gear S2, stylish and smart watch, and Samsung gear VR. According Sasaki, next area where we should expect a lot of traffic is VR (Virtual Reality). And VR is not just for a gaming but may also conquer other territories such as real estate, where surprisingly, people are willing to buy a house without visiting it or in education where the technology can offer the VR tour of the world in every school. Samsung applied the VR in their smartphones, like the Galaxy 5, and just headphones are needed to get a VR experience. In his summary, Sasaki pointed out the challenges that society faces nowadays and summarized the solutions: IoT can be a catalyst, partnerships are critical, technology and innovation are moving at an even faster pace than in the past.

A world experienced wide robotics revolution – stated second keynote speaker Rodney Brooks, Founder, Chairman and CTO of Rethink Robotics – sustaining growth in the face of demographic inversion. Brooks is convinced that time for the robots to interact with humans in the daily life is now. As he described it: It knows what you mean and it does what you want. Radical rethinking of manufacturing strategies is underway. The time is now because of convergence of Industrial Internet (Intelligent devices networked into intelligent systems), Additive manufacturing (Changing the economics of scale), Near-shoring (Benefit of low-cost outsourcing is eroding), Digital revolution (Cheap sensing, cheap computation, pervasive connectivity). As the population enjoys long life expectancy the robotics is going to get pulled into in home for elder care and find it use in the aging population. Brooks showed the statistics from Europe, 1950 when the population reaches 349.8 million and life longevity was 80, in Europe 2050 the population will be 401 million with life longevity to the late 90. The speaker reminded the audience that the first commercial robot was developed was in a GM factory in New Jersey in 1961. Today robotics represents baxter, research robot; the product of robust and growing developer community sharing code and applications, uses the Unified RobotDesriptor Format (URDF) for collaboration across groups, uses open source ROS framework, the standard in academia and corporate research, complete robotics platform with low-level control for custom application development, interface for custom end-effector development.

The keynote speakers set the mood for a vibrant Automated Future: Human + Technology panel discussions over the next two –days of KTech symposium. Meanwhile more than 35 Korean companies in security, wearables, big data, e-learning, hardware and software were presenting their solutions for the world at the expo area along with international job fair at the Marriott hotel in Santa Clara.

Photos of the event can be found at: https://brightblueii.com/photos/ktechsilicon-valley-2015/