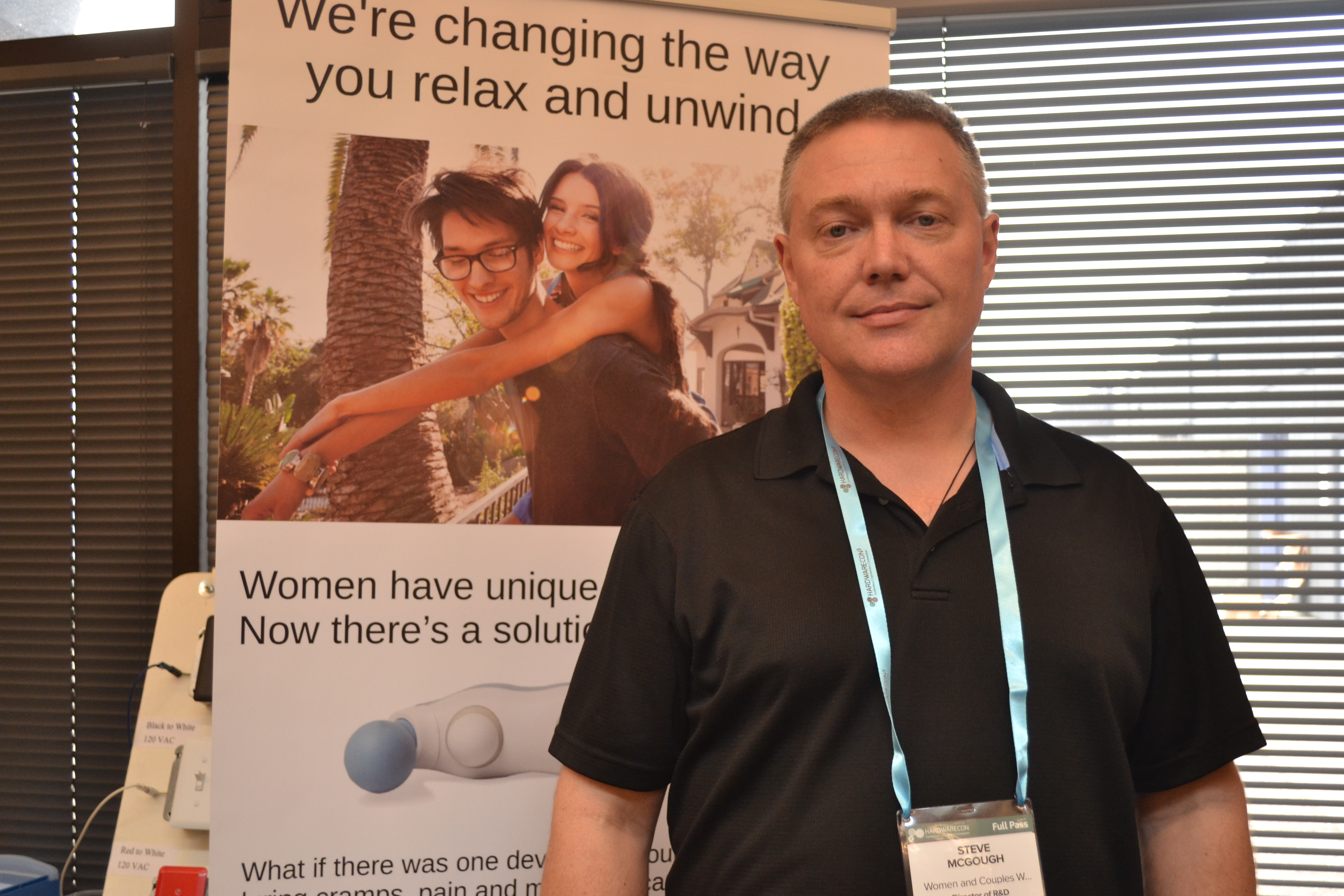 The author of the proverbial statement – Necessity is a mother of invention – is unknown. It is sometimes ascribed to Plato, the Greek philosopher who lived in Athens in the time 300 years BC. But even the quote is very old, the meaning is current. Difficult situations inspire ingenious solutions.

This is what happened to Steve McGough, founder of product named Hi that helps women and couple experience new way to relax and enjoy life. Since 2009 their unique technology has been refined and tested on over 2000 women. Today their method and technology has been patented in the US and Australia with patents pending in the EU and Canada. At the 2016 HardwareCon in San Leandro, California, Steve presented a lunch time keynote session and presented his soon to be on the market product to the crowd.

Heading back to his story of invention.

Steve discovered the technology behind “hi” when trying to help his wife Wendy find a way to relieve pain from a surgical adhesion. In 2007 he rushed his wife to a hospital for emergency C-section following 5 years of trying to have a child. Steve and his wife Wendy, then had their life take a dramatic turn. In the last few months of pregnancy, Wendy was exposed to an antibiotic resistant bacteria.

Their son lived for only one day. Wendy left with not only mental scars but also physical scars that were not healing quickly. Steve researched everything he could think of that might help with the physical issues, and finally he came up with an abdominal massage technique that helped reduced her pain. The method required continuous vigorous massage for 5-10 minutes.  This wasn’t easy to maintain manually and he started to look for automated massage devices. He was unable to find anything that fit his needs, so as an engineer he designed it by himself. It took him about a year to design & build a unit that worked well.

But there came a surprise.

The side effect of massaging the abdominal was an orgasm. After Wendy noticed it some of women who volunteered to test the device, over their clothing, reported the same effect.  Steve who previously worked in neuroscience research was looking for an answer. Talking in the role of an “IT guy”, as he describes himself, about something that is still taboo, especially in the southern portion of the US, wasn’t easy. He contacted investors and friends who repeatedly warned him to abandon the project “before it destroyed his reputation”. Instead he ended up going on journey across US, the Caribbean and Asia. After 7 years of research and refinement (testing on over 2000 women) he proved the effect and outcome to be true. Along the way, Steve became a professor of clinical sexology in San Francisco to better discuss the issue with an interested community.

To bring the product to market, he had to start the manufacturing process.  Manufacturing for the large device is very expensive, typically $800K – $1M. He received the offers from adult entertainment & products related investment groups, but he knew that this new technology helps women relax in many ways far beyond sexual areas. Fortunately he met Greg Fisher, the CEO of Berkeley Sourcing Group, LLC who realized full potential of the product.  His turn-key product development company finalized the designs and set up manufacture in Asia. Together with Greg, and his team of mostly female designers and engineers in China they created this version of hi that will be released in 2016.