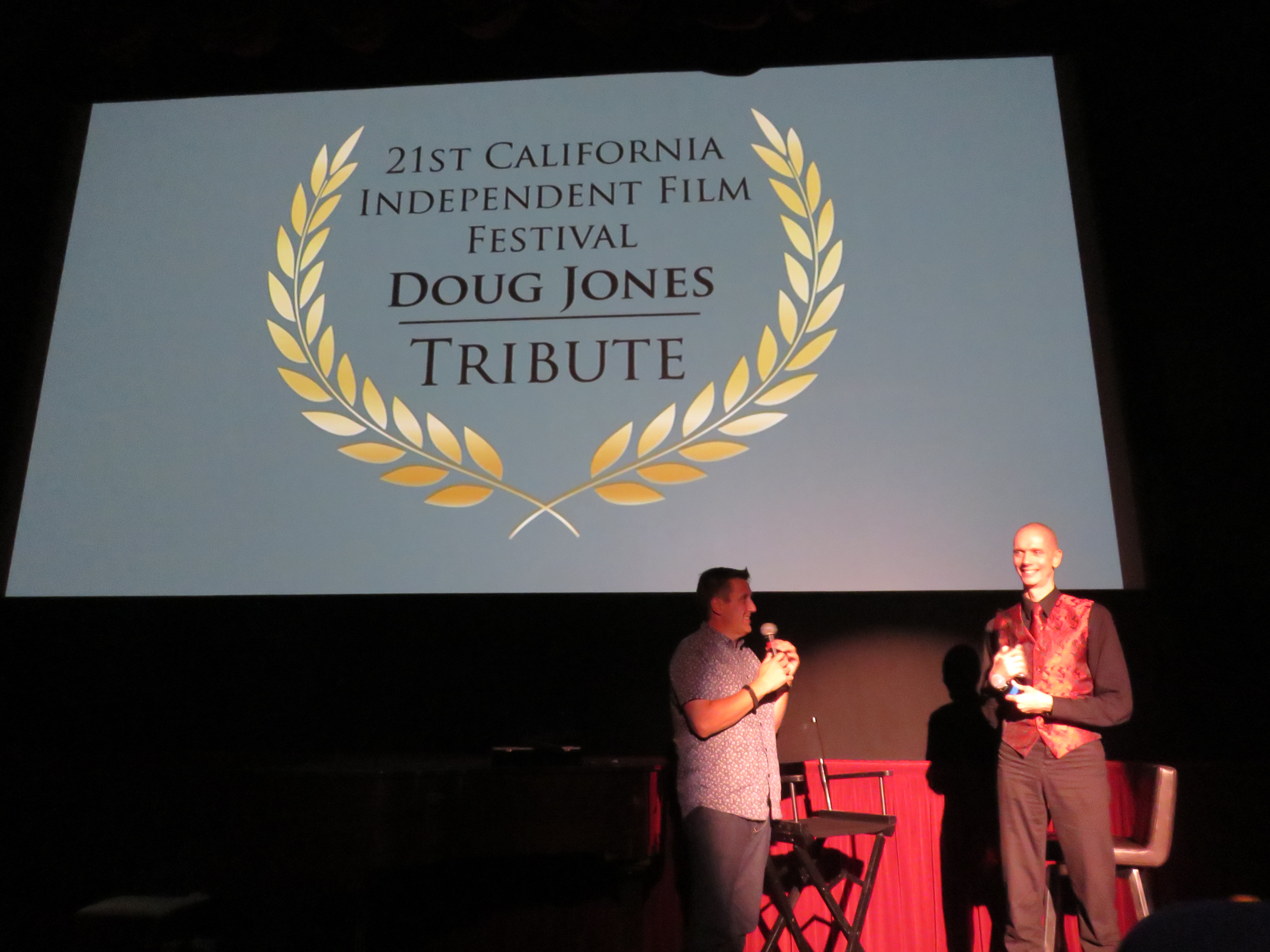 After pulling off an all-nighter on the set of the popular TV series “Star Trek – Discovery” in his role as Commander Saru, actor Doug Jones was scheduled to fly the next morning from Toronto to San Francisco to be honored and presented onstage with a “Lifetime Achievement Award” at the California Independent Film Festival.

Not bad for an guy who has been unrecognizable to most of the public since he is usually behind  layers and layers of prosthetic makeup in the majority of his roles, but has become a Hollywood icon for over his thirty-year career by playing some of the most unforgettable characters ever created on screen.  The latest being “Amphibian Man”, the sea creature who falls in love with a mute woman, played by Sally Hawkins in last year’s Best Picture winner, “The Shape of Water”.

As soon as he arrived in the theater, he was sincerely apologetic to the cheering crowd for being late.   He certainly didn’t disappoint his legion of fans, including the many Trekkie’s, as some actors in this position might have taken a different approach, such as cancelling all together, but Jones seemed to care more about his fans than about himself and it definitely showed.

Interviewed by CAIFF founder and President, Derek Zemrak , Jones recalled growing up as a “a very tall, goofy, skinny kid” in a small town in Indiana.  He was made fun of and picked on by all the other kids over the years.  To survive all that, he went on to become the class clown, inspired by the likes of Dick Van Dyke, Jerry Lewis, Danny Kaye…Carol Burnett, Mary Tyler Moore, just to name a few.  Those were “his” people.

“I’m inspired by that TV, so I should be on it one day”, Jones reminisced.  “All my friends are on there, so I want to join them, right?”.

While going to school at Ball State University in Indiana, in addition to being the team mascot, Charlie Cardinal (with the red bird suit) he was learning mime as part of the mime troupe, “Mime over Matter”.  His first job after graduating was as a street mime and contortionist at King’s Island, an amusement park in Cincinnati.

Jones explained that his “excuse” job to move to Los Angeles was to apply for a bank management training position for nine months, but was fired after eight months.

“As they should have!…Banking?  You don’t want to trust me with your money.” Jones exclaims. 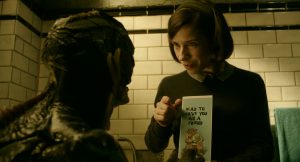 Then he got involved in TV commercial acting classes in Los Angeles, and within six months he was a dancing mummy on a Southwest Airline spot, and the three years following that, did 27 commercial TV spots for MacDonald’s “Mac tonight” campaign that allowed him to buy his first house.

With his contortionist skills and his “flexible” reputation as “a tall, skinny goofy guy, who moves well; wears a lot of crud on his head and doesn’t complain about it”, his attitude, along with his affable personality helped Jones make that successful transition from TV commercials to the film industry; more specifically the creature effects makeup industry”.

Jones reminisced how he was referred to by a well-known stunt friend, who was well aware Jones could put his legs behind his head, which eventually led him into his first gig on his first major motion picture.

“I got a call from the Stunt department…”, Jones explains.  “We want to you to come and meet us”.  After Burton demonstrates his skills, the stunt writer says “hang on a second, I’d like you to meet somebody… and he comes back with Tim “freaking” Burton.  So, after I wet myself…”, Jones demonstrated his skills again.  Jones got the part in “Batman Returns”, without even having any head shots.

In addition to playing the Thin Clown in “Batman Returns”, his other highlights include playing Billy Butcherson in the perennial favorite Halloween movie, “Hocus Pocus” starring Bette Midler; and the title role in “Fantastic Four – Rise of the Silver Surfer”.  However, he has become Guillermo del Toro’s “go to man”, in which he no longer needs to read the script for his films to accept the role.  He has worked in seven of his films, including roles of Abe Sapien in the Hellboy series, the Faun and Pale Man in Pan’s Labyrinth, and Amphibian Man in the Oscar winning Best Picture, “The Shape of Water”. 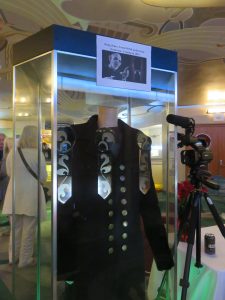 The original costume worn by Doug Jones as Orlok from the forthcoming movie, Nosferatu,, scheduled to be released in 2019. Photo taken at the lobby of the Orinda Theatre. Photo by Marcus Siu.

After having played so many monsters and creatures, Jones had just one dream role left…

“If you asked me ten years ago, what’s the one role you haven’t played yet you really would love to?”  My answer was “I haven’t played a proper vampire yet…I want fangs…I want to be a classic vampire…I’m too old and gross to play a young sparkly vampire.  Jones continued.  “Who’s old and gross? “Nosferatu!”.”

As chance would have it, Jones would get a call from Director David Lee Fisher, who did a 2005 remake of one of the first original German horror silent films, “The Cabinet of Dr. Caligari” that was shot over a hundred years ago; in which the remake updates the silent film with sound and dialogue.  He called to see if Jones wanted to play the lead role in his upcoming project, “Nosferatu”.  Little did Fisher know this was Jones’ absolute dream role was to play Count Orlok in “Nosferatu”.

“What’s really special…is the film in the background is all shot in green screen and the original footage from shot nearly 100 years ago will be all in the background.” Zemrak added, who came on board as one of the producers of the film, as well.

Jones also added, “not only did I get to play that character that I longed to play, but I got to play in the environment that Max Schreck got to play in.”

Something tells me with the enthusiasm and amazing talent of Doug Jones, this new and upcoming “Nosferatu” won’t suck.

Article and photos by Marcus Siu