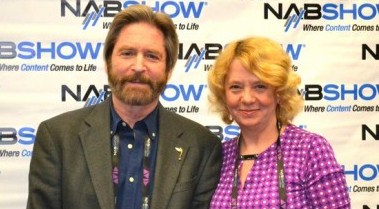 At the 2014 NAB Show in Las Vegas, we were lucky enough to get rare, extended, and quiet interview time with film industry icon and controversial technology developer/evangelist Dr Barry Sandrew.

BS – The film and effects industry is my second career. I actually went to school and got my doctorate in neurosciences, and then ended up transitioning from studies to being on the faculty at Harvard. While there, I established three different labs in the area of neuroscience. One of those was the first neuroscience imaging lab, a part of the Department of Radiology, that focused on MRI, CAT and PET scanning and imaging of the brain. I also served as a staff member at Massachusetts General Hospital and at the Columbia University, College of Physicians and Surgeons.

Way back in the late 80’s, an entrepreneur came to me and asked if I could develop or invent a process for colorizing black and white movies. I knew that it already had been done in analog form and it was terrible. Everybody knew that. What they wanted was a digital version of the colorization process. The reason for doing that was, if you take public domain black and white movie and you colorized it, you owned the copyright of that colorized version for 95 years. This opportunity caused me to leave academia and form American Film Technology where we invented the new colorization process.

I was involved in the colorization business through the early 2000’s. In 2006, an associate came to talk to me about 3-D, and showed me that Mitsubishi already had a 65” 3-D ready TV., unfortunately, the store owners did not even know how to hook it up to display 3-D images. My partner and I saw an opportunity and looked into the business and technology of 2-D to 3-D conversion. There was an old patent from almost 40 years ago that described a methodology, but it was very crude and, of course, not digital. Interestingly, almost 65 percent of the flow that was needed was already part of my colorization flow, so I moved by efforts to the 3D conversion business.

As you are now in the 3D business, what did you see at the start?

BS – First of all 3-D is not dead. The technology is strong and can bring new options to story telling, but I think the industry did a horrible job in trying to educate the consumers. Additionally, the media did not understand the process or the product, the retailers obviously did not understand any of it, and they did not even know how to sell the product to the audience.

When I first got involved with 3-D, I was amazed at the opportunity and I realized that all I had to do was to develop the last part of the flow. I did some research, and I knew what was happening with Cameron on Avatar. I knew that some money was being spent on it and more would follow. I knew a lot of people were working on it. It was very very clear to me, that it is either going to be a game-changer or the biggest disaster that ever happened in Hollywood. I wanted this conversion technology to be ready by the time of the Avatar release. We completed development and were able to start doing demos for the studios in 2009.

One of the challenges is that media says the product (3-D) did not take off this time, as it has in the past. Part of this is due to the fact that initially some 3-D content was not that good, I can honestly admit. There was a rush to market by the studios. Everything we did at Legend3D was perfect, but some of the new stuff like “Clash of the Titans” was horrible. But keep in mind it was not the fault of conversation process. This was the first movie conversion for the company that did the the work.. When the decision was made to go 3-D, they had only 5 weeks and almost no budget. The only mistake was to say yes to the project. This gave 3-D a bad name as the major follow-up to the game changing film “Avatar”.

What do you believe it will be the future of 3-D?

BS – The directors are getting better and more sophisticated about 3-D, not just using it as a gimmick, but are including it in the story. We worked with Zack Snyder on “Man of Steel”. At first, he was not sure what could be done. Then, after seeing some conversions, he learned how to incorporate the VFX into the story line and enhance the plot or feeling of a scene. It is key to include this technology aspect as part of the story, not just an add-on. It affects the shot, to know what needs to be filmed and framed, so it can be converted and keep the audience involved with the film.
One of the big futures will be 3-D TV. There is currently a lack of content, but that is being addressed. Then you have the confusion of active glasses versus passive glasses, it is a real mess. Right now, the technology in TVs is that most of them are 3-D capable for almost no extra cost, and people are buying them that way – but not using them as 3D sets, because they don’t need to. But once it is in the home and “Little Johnny” comes from next door and says that he just saw Shrek in 3-D and asks “Why we do not have a 3-D TV?”, they probably will realize they do. Once that happens, then they are going to use it.

Most of the current auto-stereo technology is some sort of lens based solution, that ends up having multiple sweet spots for the 3D effects. Once the devices incorporate eye tracking, which is already appearing in some products, you are going be getting people looking at it and saying it is amazing, rather than getting sick from it.

It seems in your career you have chosen to run the company instead of work for a company. But when you talk about the companies you are saying “we” rather than “you”.

BS – Yes and no. I have started several companies. I never worked for a company. I developed the colorization and 3-D flows and tools. About 2 years ago, I was president CEO, CTO, COO and Chief Creative Officer (CCO) at Legend3D. When I started all those companies, I held of all those titles. And then as I hire the people I think can do better than I can, I turn over those roles to them. Instead of what happened, 18 months ago, we got a new group of investors and I turned the CEO role over to my general manager. I took the more creative role, and I maintained my CTO role. I became some sort of luminary for 3-D and I have been giving talks all over the world. No, I do not run the company any more, but I do represent the company and enjoy being the creative force in getting them going.

What is ahead for Dr Sandrew in the future? Are there any other personal goals you are trying to achieve?

BS – I love creating and working with creative people. I have a number of new things in mind and visible on the horizon, but I can’t talk about those right now. I think the real thing is that I enjoy the controversy about “can this be done?”. I have been in the right place at the right time, so the controversy has actually helped promote the businesses on a financial basis. It helps bring out the early adopters and risk takers. I am not done yet – there are always things coming up as new opportunities.