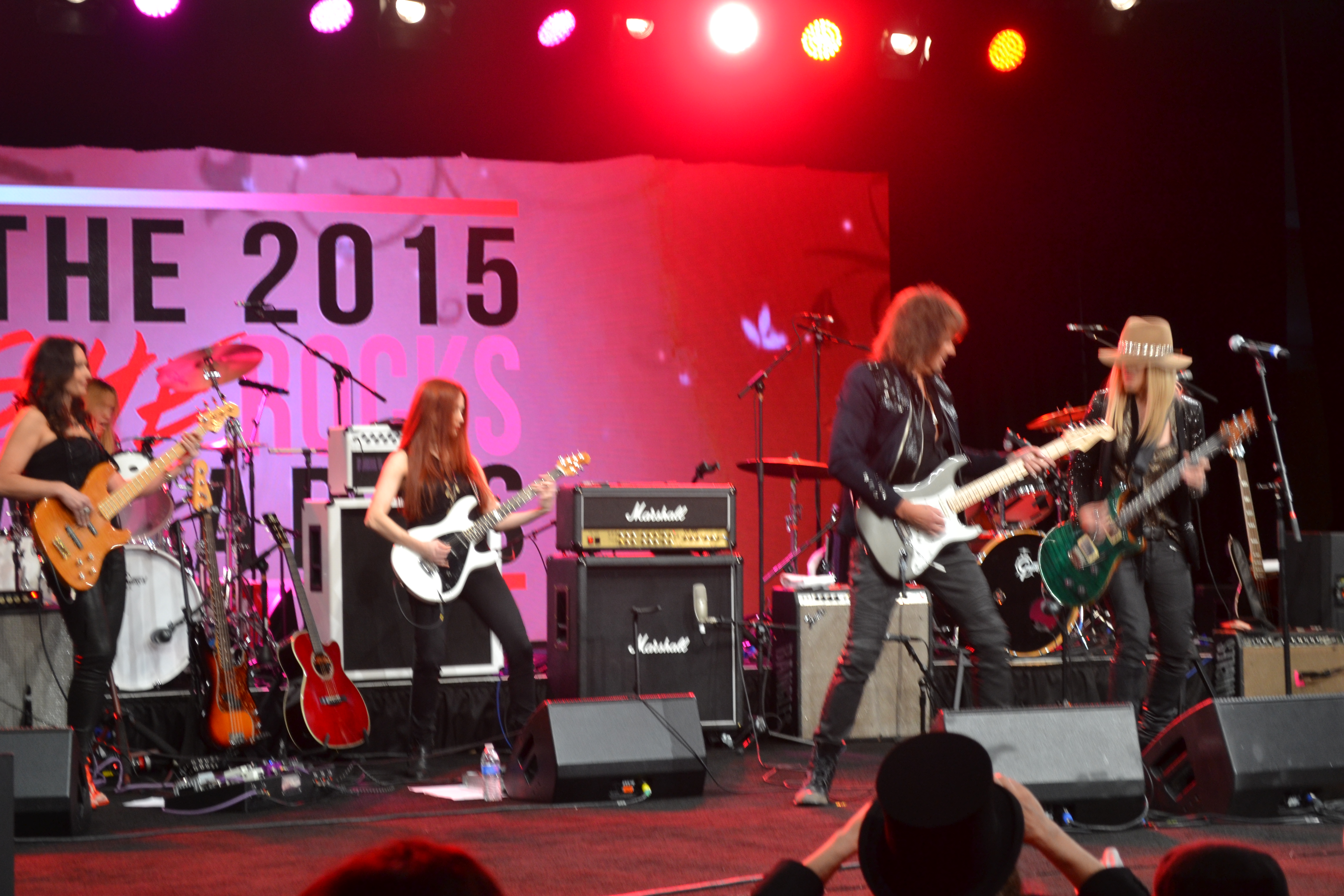 At the NAMM Winter Conference, the She Rocks Awards moved from their daytime subdued event to a full nighttime gala event with red carpet. The 2015 She Rocks Awards were hosted by the founder of WiMN Laura B. Whitmore and performer Orianthi.

The show opened with an opening performance by the fast rising group SHEL. The four sisters who make up the group are touring the US and Europe between recording new albums and music for television, film and commercials. Continuing the theme of celebrating Women in Music the award ceremony featured an all female house band. The house band was led by guitarist Gretchen Menn and included Zepparella members Angeline Saris on bass, Clementine on drums and guest keyboardist Jenna Paone.

The show had one non-female winner – Rob Christie was recognized for the Champion Award.

The highlight was the “ICON” award winner as major contirbutors to the field of Women in Music. This year’s award was given to The Bangles – Vicki Peterson, Debbie Peterson and Susanna Hoffs who also performed that evening with the host and house band.

Spanning all varieties of music, the “Mad Skills” award was given to Mindi Abair. Berklee College of Music graduate Mindi is receiving multiple recognitions in addition to the She Rocks Award with several Grammy nominations and increasing demand for her unique saxophone style and sound. Mindi addressed the crowd with the fact that in her music career a lot of her success is due to the support from her family and teachers who encouraged her to follow her own style and sound, and that she did not have to conform to “sound like someone else” she “can create and define her own sound”.

The “Legend” award was given to Capitol studios manager Paula Salvatore who in her 24 years at Capitol has been an integral part of recordings for some of the industry’s most iconic artists.

The “Inspire” award was given to Debbie Cavalier. Debbie is currently the Vice President for Online Learning and Continuing Education/CEO for Berklee’s award-winning online continuing education program, Berklee Online, and is also the leader of the award-winning kids/family band Debbie and Friends. She has also been the recipient of the 50 on Fire Award, the 2013 Education award, and also composed and recorded a song featured on the 2011 GRAMMY Award-winning CD for Best Children’s Album through her work with Debbie and Friends.

The “Excellence” award was given to Craigie Zildjian the first female CEO of the 400+ year old Avedis Zildjian Company. She has also sponsored the Zildjian Family Opportunity as well as the Zildjian Percussion Facility at Berklee College. Additionally, Craigie developed the American Drummers Achievement Awards, an event that honors drumming legends. She also is an active member in the musical community with past service on the Board of Directors for the International Music Products Association (NAMM), the Board of Advisers of the International Association of Jazz Educators and the Board of Overseers at New England Conservatory. Currently, she Chairs the Zildjian Board of Directors and is a Trustee Emeritus of the Berklee College of Music.

The “Video of the Year” award was given to performer Colbie Caillat. Colbie is a two time Grammy Award winning singer-songwriter who has sold over six million albums and ten million singles worldwide. Caillat released her fourth studio album Gypsy Heart, which features her hit single “Try” which was co-written by legendary producer and singer-songwriter, Babyface. The companion video for the song has become an online phenomenon, quickly amassing 30 million views. As was the video recognized with this award.

The “Next Generation” award was given to Katie Kailus. Katie Kailus is the editor of Music Inc. and UpBeat Daily magazines. She started at Music Inc. as an intern and was soon appointed associate editor. In January of 2014 she was named editor. She is one of the first women to ever be named editor of a musical instrument trade publication.

Also being recognized were Gayle Beacock and Amani Duncan. Gayle is co-owner of Beacock Music Company in Vancouver, Washington. Their Education Center is widely regarded as one of the top in the country. Amani is the Vice President of Brand Marketing for C.F. Martin & Co. A 17 year music industry veteran, Duncan’s experience runs the gamut from artist relations to visual marketing, digital and social media, campaign creation and strategic partnership negotiations.