Hamlet for the ages 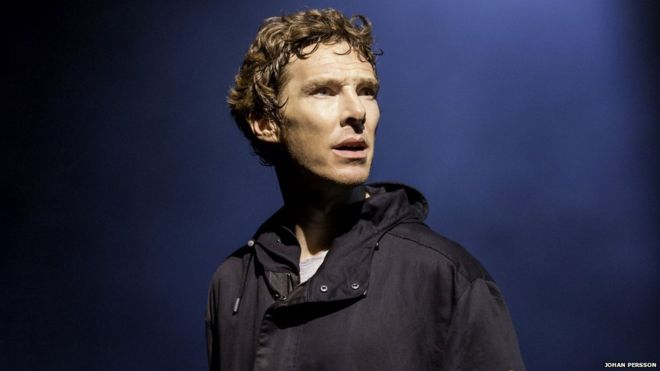 On the evening of November 10, 2015, thousands of fortunate theatre-goers world-wide were treated to a rare theatrical experience.  They were offered the opportunity, through the good graces of Fathom Events, to witness a filmed live presentation of William Shakespeare’s immortal tragedy, Hamlet staring Benedict Cumberbatch of “The Imitation Game” fame in the title role.  And a rare treat it was.

At the ripe old age of 400, Shakespeare’s iconic work, bursting at the seams with 4,000 vibrant lines of verse and prose, is as vital and relevant today as it was to audiences in the 17th century.  An un-cut version of the play can run up to a daunting four hours, yet in an age of instant global communication and fast food, it nonetheless remains for us one of the greatest works of dramatic literature ever penned.  Shakespeare  not only belongs to the ages…he belongs to the world.  In fact, his 37 plays have been translated into more than 100 languages and in the past ten years alone there have been seven professional productions in Arabic and over the years countless amateur and professional performances have been done in Yiddish.

Shakespeare’s plays were performed at the fortuitously named Globe theatre in Elizabethan London, a large round “wooden O” which was open to sky and could accommodate 1,500 spectators, with the gentry seated above and commoners standing below in the yard and having put 1 penny in a box at the entrance (origin of term “box office”) for the privilege.  The bare stage thrust out into the yard where those Groundlings (also called “Stinkards”) stood and was completely devoid of any scenery.  Consequently, the actor relied almost exclusively on Shakespeare’s dialogue to fix the location of the action.  Such lines as “Here we are in the Forest of Arden” fulfilled this demand admirably.  Costumes and props were minimal, limited to perhaps an occasional crown or sword, with Claudius no doubt wearing an identifying crown and Hamlet with sword in hand, dispatching the hapless Polonius behind the areas in Gertrude’s bed chamber. “Thou wretched, rash, intruding fool, I took thee for thy better.”

But that was then, and even though the language of the plays has remained constant throughout the centuries, what has changed radically has been the style of acting and the entire miss en scene, i.e., the sets and scenic design elements, the sophisticated computerized lighting, the elaborate costumes, etc., all determined by the culture of the time and place where the plays were performed.  A minority of productions have remained faithful to the bare stage tradition of the Elizabethan period such as Richard Burton’s  dynamic, bare-bones1964 Broadway presentation, performed on a bare stage with actors  performing in rehearsal clothes (Burton hated period costumes).  In contrast to that production, we need look no further than the over-the-top, sumptuously extravagant 1996 Kenneth Branagh film version which he directed and played the title role.  His is a Hamlet that pulled out all the stops and was roundly criticized for it, not being “faithful” to the original text it was claimed. In one scene for example, Ophelia is in a padded cell sporting a straight jacket with little evidence in Shakespeare’s text of such a fate.

The National Theatre’s offering at the Barbican clearly leaned more to the Branagh rather than the Burton tradition, but with infinitely greater moderation, being quite legitimately, a richly staged production which captured the dark essence of the play.  Here we have an Elsinore that is dank, cold and cavernous, dwarfing its doomed inhabitants, and being at once both elegant and decadent, fostering a thematic tone of foreboding that took on the qualities of a forbidding damp tomb, perfectly complementing the emerging tragedy that is unfolding.

And Shakespeare’s language?  Mr Cumberbatch, ably backed by a splendid supporting cast, delivered his lines with an honesty and clarity that immediately engaged his audience and allowed Hamlet to come alive for us through the immediacy of the emotion he so effectively conveying.  His was not so much the traditional “melancholic Dane” as he was a man beset by overwhelming passions and unbridled fury, the inevitable escape from which could only be realized in death.

If, as Hamlet extols to the visiting players, “the play’s the thing…”,  then this well balanced, forceful production of Hamlet, splendidly sculptured for a 21st century audience, fulfilled that admonishment.