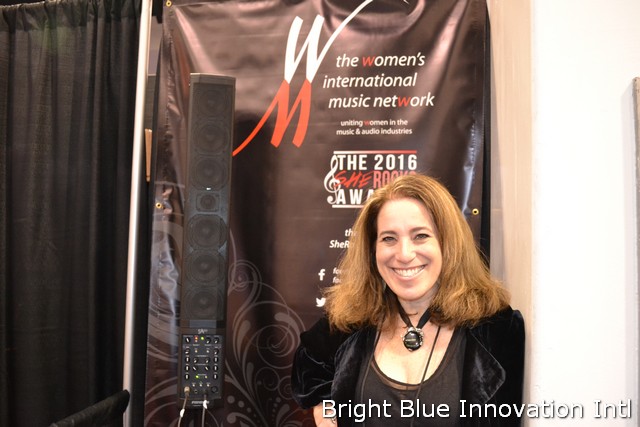 January, NAMM 2016 – The Women’s International Music Network was founded in 2012 and it came about in an organic fashion, stated Laura Whitmore, its founder. As a journalist, she interviewed many female musicians and she came across the same stories again and again. One story literally blew her mind. Whitmore heard from a 70-years old female performer. After 50 years playing guitar, she still opens her performance with a killer guitar instrumental just to show right away that she knows what she is doing with her instrument. After f- i-f-t-y years, she still feels like she has to prove herself – said Laura stressing the number of years. There always are people who see female musicians as someone’s girlfriend and people who don’t believe that they can set up their own gears.

Those women have to prove themselves over and over again. There are definitely attitudes and discrimination – stated Laura – and women do not have full voice in the industry. She does not necessary feel that woman musicians are different than men, but there are concerns and issues that female musicians face than guys don’t. Her reporting on female musicians drove the development of the Woman’s International Music Network. In just a few years of existence. It has expanded and grown to encompass international outreach, expanding from operations in the US.

Laura is also the founder and host of the She Rocks Awards, now in its fourth year as a part of NAMM. The event is dedicated to paying tribute to woman who display leadership and stand out within the music industry. In the same way as The Women’s International Music Network, The She Rocks Awards event was developed naturally and organically from the curiosity to know other women in the industry. Laura who worked as a journalist and PR professional in the music for over 30 years, admitted that she did not know many women from that area, so she wanted to create an event for them to gather. Then someone told her – why not give those women the awards for their exceptional accomplishment? That how The She Rocks Awards started. The first year debuted as a breakfast event and then became the cornerstone, widely attended evening event with well-known music stars performing. Icons from this arena get recognition, and share their wonderful stories. The event also includes a silence auction and giveaways. The event sparkles with energy for a fun girl’s night out.