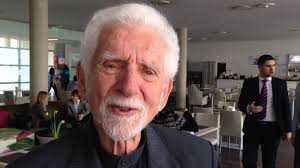 IMS, May 2016 –At the International Microwave Symposium this year a legendary inventor, a father of the cellphone, Dr. Martin Cooper, was speaking at the plenary session on Monday, May 23.  In 1973 Dr. Cooper worked for Motorola when he presented the first handheld cellular phone to the world.  In a short 10 years later, the “DynaTAC 8000x” the model was released to the market. Today it is hard to believe that first cellphone weighed almost 2 pounds and looked and felt like a brick. The first model that retailed for $3,995 and with its 30 minute of battery charge, it was far away from the functionality and beauty of today’s standards.  But since that time, cellular phones have been becoming less expensive and with upgrades and vast technology improvements, the mobile phone was becoming accepted as part of the mainstream life on its way to conquering the world.   In the last 20 years, the number of cellular phones rose from 12 million to 5 billion. Dr. Cooper maintains that, although the phone contains amazing semiconductor and other advance technologies, the phone itself is still in its infancy. Personal wireless connectivity has the potential to change our approach to health care and education sectors.

Unfortunately Dr Martin speech was disrupted twice by fire alarms and some time passed by because of the clearance procedures but having this accomplished inventor at IMS was a real treat for the attendees.