Are movie theaters left in the dark in the age of COVID-19? 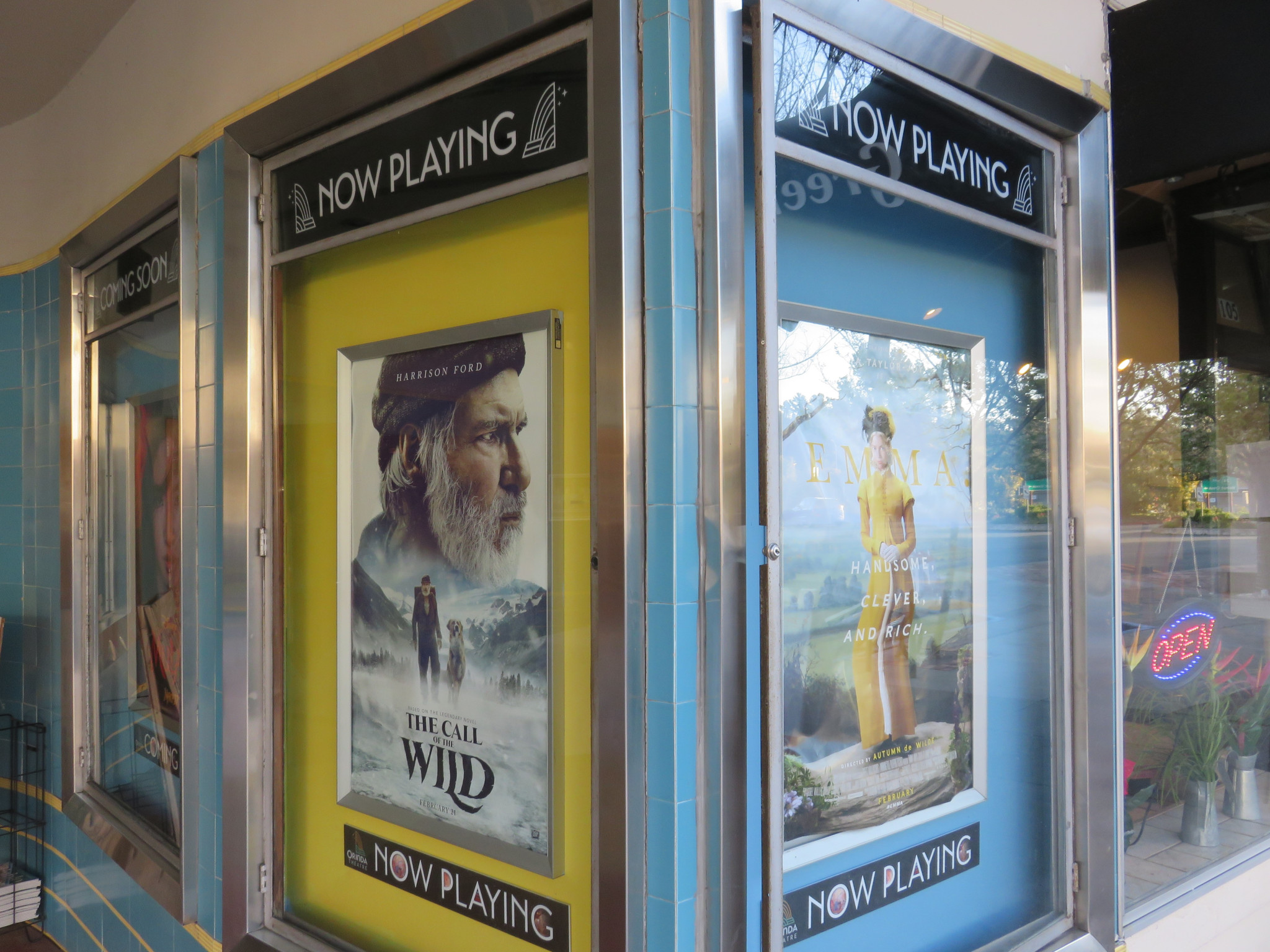 It’s 6pm on a Friday night in the East Bay at the historic landmark Orinda Theater, just 15 miles east of San Francisco. With its impressive luminous flashing neon lights on its marquee displaying a spectacular view to those who pass along Highway 24 at night, it gives pride and joy to the citizens of Orinda to have its city name in glittering lights, as not many intimate cities in the Bay Area can claim.

Outside, underneath the retro ceiling before the entrance doors of the theater, newly installed neon lights bounce off eye-popping colors onto the reflective glass cases that display the movie posters of Hollywood’s latest offerings; “Emma” “Onward”, and “Call of the Wild”. Cars full of movie going customers are coming from all different directions from the East Bay while the percolating sounds of the popcorn machine make noise non-stop in the lobby at the concession stand getting ready for the crowds.

You would think this would be a typical Friday movie night for this majestic theater, but it is quite the contrary. No movies are playing at any of its three auditoriums. Nor are there any customers inside the lobby that are normally filled with crowds waiting in line at the concession stand or hanging out at Cine Cuvée, mingling in groups at its attached wine bar.

Tonight’s event is called “Movie Night In”, an ingenious promotion posted on social media from the theater’s Facebook page, where for a mere $20, customers can get a large bag of fresh popcorn, a box of “official” movie theater red vines, and either a bottle of quality wine or four beers that are normally sold at the theater and wine bar. Best of all, customers need only drive up to the curb where theater owner, Derek Zemrak, would personally deliver their orders straight to their car, just like a the old carhop waiters did in the the 60’s. The promotion is in response to the “shelter in place” order by the county that forced all movie theaters to close its doors in mid-March around the country due to the COVID-19, more commonly known as corona-virus.

Of course, with the “Movie Night In” promotion, customers still needed to provide their own entertainment at home. Despite this, it seems just bringing a few goodies from the local movie theater can certainly make the evening more enjoyable, even if the participants are just stationed in front of the TV right in their own living room on a La-Z-Boy sofa or recliner.

Unfortunately, with the building’s high astronomical rent and utilities due each month, Zemrak was forced to close the theater and lay off his entire staff.” At least they can get unemployment…you can’t make money on zero revenue”, Zemrak noted.

Though “Movie Night In” generates a very small fraction of income, it has now become a regular Friday night ritual for some of the patrons. Some customers have gotten used to the idea. Still every little bit helps. “Not too many people realize how expensive it is to operate and rent a movie theater. People see the movie theater and don’t even think anything about how expensive it is to operate”, Zemrak said.

“We just need to sell a thousand $25 gift cards and we’ll be fine”.

TO STREAM OR NOT TO STREAM – THAT IS THE QUESTION

Ironically, the movies that had to immediately cease playing at the theater at the time of the “shelter in place” order came into effect are now streaming on VOD (video on demand). While not all of the theaters were forced to shutdown in the country before the federal government stepped in at the time, NBC Universal announced that its own movie studio Universal Pictures and specialty label Focus Features would be releasing their films in theaters and on-demand simultaneously. This was the path taken by the studios to help salvage their box office gross for their current lineup of their theatrical releases if all theaters were forced to close, which it did.

Instead of watching “Emma”, “Onward”, and “Call of the Wild” in movie theaters, moviegoers can now only watch them only on VOD . It seems as streaming services, such as Disney Plus, VUDU and Amazon Prime, overnight has made the “home movie going experience” much more exclusive to the audience as they “shelter in place”.

In addition, NBC Universal is planning to launch a brand new upcoming streaming service called Peacock in mid July. This will make it much easier for Universal to release theatrical movies and stream it at the same time, if they ever decide to. They could completely eliminate or reduce the “theatrical window”, which is typically 72 to 76 days for most movies before it reaches home video or VOD. Nonetheless, the ease of home viewing could continue to be destructive for movie theaters, big or small, struggling to stay afloat in an age of shrinking theatrical window dates, let alone the dreaded, coronavirus. If movie studios decide to follow Universal’s suit, then all movie theaters will be in peril; the movie theater chains, like AMC and Cinemark, as well as the small independent theaters, like the Orinda.

“If you look at the business model that’s the way to go… there’s no question, go streaming…but it’s not the right thing to do to movie theaters”, Zemrak explains. “I would have never expected Universal to be the first studio to do that”.

“If Disney, Universal and Paramount decide to go streaming at the same time… the general population are going to stay home”, Zemrak said.

“It’s going to be really interesting in the next three months to see really what happens when the theaters reopen – how studios are going to say we’re going on streaming – if that’s the case corporate theaters like AMC and Cinemark – they’re screwed, whereas we can we can survive because we have art films.”

As an independent movie theater owner at the Orinda, Zemrak is also responsible for its film programming, as well as musical and special events. With so many movie theater chains around the area, he prefers to concentrate not so much on obtaining big Hollywood blockbusters for the theater, but the non-mainstream gems that mature audiences will resonate with. One such film was “Parasite”, which was one of Zemrak’s prime choices that he selected to play at the theater immediately after it had won the Golden Globe for Best Foreign Film in early January and before the Oscar nominations were announced. At that time, it was not a wide release film and played a record run for 12 straight weeks at the theater and turned into an unexpected blockbuster due to the Oscar buzz and year-end awards it received, including winning “Best Picture” at the Academy Awards, the first foreign film to ever accomplish this, which Zemrak rightly predicted after the nominations were even announced and even putting his reputation on live radio.

Just like there is an audience for seeing films on the big screen, there is also an avid audience for watching movies at home. Unfortunately, the more streaming movie studios do, it becomes more and more destructive for movie theaters. It becomes a balancing act when it comes to satisfying both the studios and theaters.

“I’ve been talking to all of the independent film distributors because they’re doing things with movie theaters, to say “stream your things online and we’ll give you 40% of the take!”, Zemrak added. “That sounds good but here you have a brick and mortar building and the sub studios are saying we’ll give you money to go streaming. It’s opposite of what your base product is…but if all the major studios are going to go online and stream…movie theaters are dead.”

Zemrak also noted another major obstacle for movie theaters: the generation gap between the older and younger audiences. Whereas baby boomers want the big screen experience, the younger “i-phone mp3” generation of movie goers are content to watch the latest movies on their mobile device and be done with it. It’s about instant gratification.

“So it’s like you have this crossroad of people… this complete divide of people who say I’m passionate about supporting a theater”, Zemrak continues. “If I’m passionate about supporting a theater, I’m going to support an independent theater. I’m not gonna go the Regal, the IMAX or the Luxe. I’m going to go to an independent theater because that’s what I remember. I remember going to these movie theaters that are special whereas the younger generation have no connection whatsoever to a movie theater.”

“It’s not about the Cinemark with the recliners and the comfort of the room, it’s what I want to reminisce about when I used to go to the movie theater. It was something special – like the Roxy, the Castro, the Orinda Theater. I can go and feel something from my past and go to see a movie. That’s what it’s about…but the other generations – the Generation X and the Generation Z (millennials). – they’re not going to go to the movies. They watch it on their tablets, on their iPhones, and watch it at home.”

As “Movie Night In” comes to a close for the evening, Zemrak was pleasantly surprised at the number of incoming online orders for movie gift cards. In these difficult times for small businesses, there is still a glimmer of hope and encouragement from local supporters who actually care, but unfortunately, COVID-19 will still lead the economy into a recession for the majority of businesses, at least in the short term.

Once the pandemic is over however, theater owners will have a difficult time to entice moviegoers to return, especially with the older crowd who are highly susceptible to the COVID-19 virus. Perhaps, the social distancing of six feet from another may still need to be enforced for awhile and the addition of a Hazmat suit until we discover a new vaccine for COVID-19 and will become the new norm. If this were the case, Zemrak believes it would completely eliminate the need for reserved seating, but given the alternative, I believe people will strongly prefer being six feet apart than being six feet under.

Regardless of the outcome, there are lots of moviegoers who absolutely can’t wait to leave their homes and rush into movie theaters. They want the option of being able to dream and escape to the movies when needed. If they can’t do that, it might as well be the end of Western Civilization, as we know it.

However, it’s the major Hollywood studios, like Disney, that would really like to see the dreaded COVID-19 to come to an end immediately. Disney’s lineup for 2020, like most movie studios, has a string of global blockbusters for the entire year and has recently announced an upcoming June 6th release date with “Mulan” which was originally postponed from March due to the pandemic. With the newly revised June 6th release date and the ever increasing number of COVID-19 cases around the world, it may seem overly optimistic by the studio…but when you wish upon a star – your dreams come true.

If anyone knows how to put people back into movie theaters, it’s magical world of Disney.