Michael Ironside in the gaming space 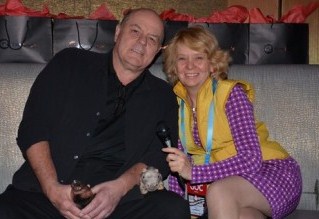 Michael Ironside is best known for his long career as an actor, producer, film director, and screenwriter in many movies and TV series. He is best known for his acting credentials where he perennially playing tough guys or psychopaths like his memorable role in David Cronenberg early film “Scanners”. Some of us remembered him from the silver screen hits “The Machinist”, “Total Recall”, “Top Gun”, and “X-Men. First Class”. Others enjoyed his performances in TV series like SeaQuest 2032.
Known to the gaming community as the voice of Splinter Cell’s Sam Fisher, now he is reprising his activity in the gaming space with a new game and character by lending his deep commanding voice and ability to build a relatable character with only his voice to Colonel John Killgore for Tank Domination. Even though he confessed that he is not a gamer (his daughters are) he sees the power of communication in the gaming business and finds the opportunity.

Michael sat down for a spirited discussion covering a variety of topics – all of which he was exuberantly open and opinionated about.

On why he likes the gaming industry

MI – Over the years, I traveled all around the world, and I found out that corporations have so much control now. They control communication, they control media, and they control everything, so they can pretty much put forward what they want without being chastised for it. In comparison, the gamers communicate online together.

I remember I was talking to one kid, who was in Johannesburg, South Africa, and I said oh my god, there is something going on in this area in the world. “I don’t want to talk about it” he answered, but I said, “It’s got me frightened because I got family there”. He went on to his gaming console and was talking to some people from that place, and asked what is going on? They said, “oh no, there was a food riot. When the people get to their food stamps, they just went over. There is no big riot”.

But the press had pumped it up. So gamers get to communicate with each other and tell the truth to each other from all over the world, it is kind of a back door into the corporations and politicians. The corporations can’t control that. There is an honesty and there is kind of neutrality in the way they communicate. You can go online at any time, you are playing with someone from South Africa, from Moscow, from Johannesburg, from NY, from LA, from Sydney. They will tell each other the truth. There is integrity in that and I like that. Anything that encourages communication, even if it is under the auspices under so called violent gamers or social gaming is a good thing.

On the storytelling in games

MI – We have been telling stories to each other since mankind climbed out of the primeval ooze, put a loin cloth on, covered up their breasts, sat around the campfire, and told stories to educate their children. Games are not storytelling. Games are being part of the story. It is a interactive storytelling. This is play. This is taking the place of “tag”, this is taking place of baseball or hockey. It is a community and a group thing. Film is also a community and group thing, but it is observational not interactive. That is storytelling, that is tutoring, that is teaching. Games are different, as you get to be part of the story, interact, change it direct it new ways, and develop a personal experience that other people don’t have, it is a 1:1 real time memory that is being created – not just a replay with the same story and outcome every time. That is why we are all in trouble, guys, because so many major corporations are holding that media and directing what experience and what memory we should have. That is a problem. I’m kind of opinionated to talk about it.

On the Colonel Killgore character

MI – Scripts for gaming are generally not very good and for me it is kind of a challenge. There was some expectation of the character based on the prior work done on the Sam Fisher character, which is why, based on the scripts, I chose not to continue that character. The Tank Domination opportunity was different. It was brought to me by a friend, and did not have a finalized script. Some parts of Kilgore character are linear, and had the result that the Kilgore character is not very deep. Specifically, 70 per cent of that character’s function is to create action to manipulate a person and give them information on where they go and stuff to do. The other part of the character and script is also extremely stereotypical. The character is the hard ass kind of no-bullshit military guy. The project was fun in a couple of places to try and make him kind of human. There are a few places in the game where I am allowed in the game to say “hmmm, alright you did okay” and that is the part that I had fun.

I enjoy the ability to participate in and help tell or be part of a story. For me, the exciting part of my work in TV, Films, Commercials and gaming is – “How do you show something that is almost impossible to make human with just a voice, a look, a stance and a movement?” That is what I spend making my career doing.