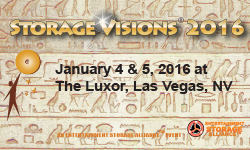 Content matters more and more as there are more tools for people to capture it, make it useful and share with others – stated Tom Coughlin at Storage Visions Conference 2016 that took place January 4-5 at Luxor Hotel in Las Vegas. Two days conference was offering the insights into the storage industry.

As the highlights of the passing year Coughlin mentioned lots of mergers and acquisitions that took place: as such Dell buying EMC, WD buying SanDisk, NetApp buying SolidFire. 2015 was a year of emergence of NVMe specification and work on NVMe optimization programming. Samsung introduced 3rd generation 3D NAND SSDs as well as all the other FLASH companies. Intel/Micron announced 3D Xpoint.

What to expect in 2016 and beyond? Definitely Panoramic Video and VR along with IoT will drive content growth in the next years. Here are the numbers that were presented to support this statement.

As the summary for years ahead we will see: continued consolidation in the storage industry, storage capacity growth with IoT, Big Data and more, mobile consumers get more storage as flash price goes down, demand goes up, greater movement of content to the cloud, more software defined storage services, HDD shift to capacity continues (12TB in 2016?), shift to 3D flash with majority of production by 2018.