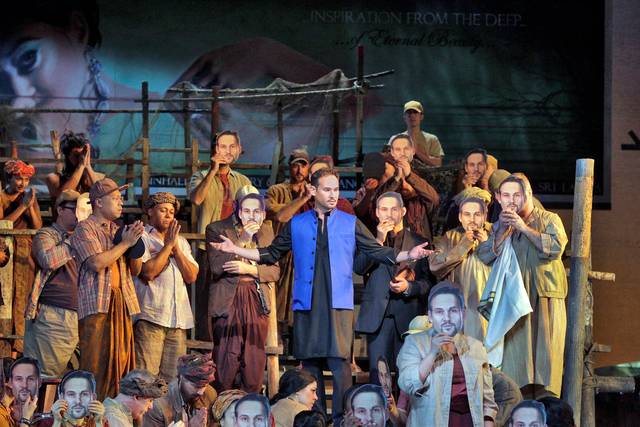 Georges Bizet (1838-1875) the renowned French composer best known for his ground-breaking opera Carmen which premiered in Paris in1875 and is indisputably one of the most popular operas of all time.

Exactly three months after it’s opening night however, and on his sixth wedding anniversary,  Bizet died of a heart attack at the age of 36 as a result of a chill he contracted after a swimming competition.   Unfortunately, Carmen had not been well received initially since it was the first time a major opera realistically depicted everyday characters in leading roles rather than the traditional subject matter featuring the lives of royalty or mythological figures.  Carmen herself, for example, is a cigarette-smoking, Gypsy factory worker of questionable virtue and this definitely did not set well with the opera-going public of the time.

Twelve years prior to Carmen in 1863, Bizet had composed another opera, Les Pecheurs de Perles (“The Pearl Fishers”), traditionally considered to be a minor effort and roundly criticized for it’s poor libretto and lack of any rousing arias while acknowledging adequate choric offerings.  And although these shortcomings seem to hold true to this day, nonetheless, New York’s Metropolitan Opera succeeded in staging a captivating and often scenically stunning production viewed by thousands of opera lovers in neighborhood theaters throughout the U.S. thanks to Fathom Events and The Met: Live in HD series, currently celebrating it’s 10th Anniversary.

The scene is a pearl-diving village in the Far East, presumably Sri Lanka, and  the plot deals with Leila, a Hindu virgin priestess and two men Zurga and Nadir who are vying for her affections.  In this traditional love triangle, Nadir, played by tenor Matthew Polenzani, triumphs and he and Leila, depicted my mezzo soprano Diana Damrau, escape a fated death as baritone Mariusz Kwiecien as the vengeful Zurga, burns down the village in a rage of jealous spite.

All of the players perform credibly, perfectly vocalizing Bizet’s Romantically derivative yet  rather engaging score, but the scene-stealer is the scenic values themselves.  The set is appropriately functional and admirably serves the demands of the production, but the real spectacle is the stunning computer generated projections thanks to the magical wizardry of 59 Productions who are credited with production design.  The opening scene for example is an underwater projection which takes up the entire proscenium of the Met stage and superimposed on the screen are two pearl fishers, actually ballet dancers supported by invisible cables a la Cirque de Soleil, who appear to be rhythmically swimming in a deep blue “ocean,’ complete with bubbles and rays of sunlight streaming through it’s depths.  Sergei Diaghilev, the iconic Russian empresario who in 1909 founded the Ballets Ruses, was once asked by a set designer what he wanted by way of scenery, to which Diaghilev replied, “Astonish me!”  and that’s exactly what the production design team succeeded in doing in this captivating production.  We were astonished!

On balance, a valuable and entertaining theatrical experience  and an opportunity to witness a pearl of an opera delicately extracted from an oyster shell of near oblivion  in a lovely offering by The Met.  Thank you and Bravo!