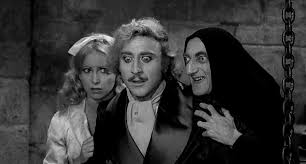 This delightful film is a hilarious parody of the flood of classic horror film adaptations of Mary Shelly’s novel Frankenstein that were produced by Universal in the 1930’s. Shot in black and white to evoke the proper atmosphere, Brooks even employs the original lab equipment props used in the 1931 Frankenstein starring Boris Karloff and features 1930’s style opening credits and period scene transitions such as iris outs, wipes, and fades to black. Young Frankenstein was a box-office smash and critically considered be one of the greatest film comedies of all time, ranking number 13 on the American Film Institute’s list of the 100 funniest American movies.

Arriving at the Transylvania train station, Dr. Frankenstein is met by a hunchbacked, bug-eyed servant named Igor (Marty Feldman). Frankenstein insists his name be pronounced “Fronken-steen,” so Igor insists his name be pronounced “Eye-gor.” A beautiful young assistant by the name of Inga (Teri Garr) is assigned to Frankenstein and when they arrive at the castle, the doctor comments favorably about the size of the door knockers and Inga thanks him, thinking he’s complimenting her anatomy. The movie is full of visual and word gags like this. When Igor asks the Doctor to follow him, he says “Walk this way,” and Frankenstein obediently limps along behind him. The doctor at one point suggests to Igor he can do something about his hump to which Igor replies “What hump.” And much to the doctor’s astonishment, Igor’s hump also seems to inexplicably switch from one side of back to the other. More hilarious moments include the top hat and tails song and dance routine performed to “Puttin on the Ritz” reminiscent of Fred Astaire with Dr. Frankenstein and the Creature singing and dancing in perfectly synchronized vaudeville style.

Mel Brooks addressed the Fathom Event audience at the conclusion of the screening and it was a delight to listen to him share aspects of his professional career with us. He considered Young Frankenstein to be his finest (though not his funniest) film as a writer-director. Interestingly, he felt his funniest film was Blazing Saddles (1974), followed by The Producers (1968) and then Young Frankenstein. However, as far as most audiences are concerned, they are all equally hilarious and our lives are richer because of them. We may have personal favorites, but thankfully we have a rich comic heritage from which to choose.

Aristotle wrote much in an attempt to define tragedy, but claimed he didn’t write about comedy because no one took it seriously. (Drum roll please: da da bum). Without realizing it, he was our first stand-up comic!

If someone tells us they don’t take us seriously, we should consider it a compliment. Mel Brooks would.