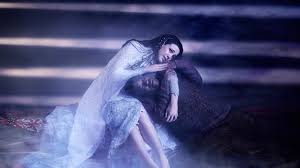 The current Met Production is distinguished for two historic reasons.  First, composed by the Finnish Kaija Saariahoit , it is only the second opera composed by a woman performed by the Met since 1903. In addition, the brilliant conducting is masterfully handled by another Finn, Susanna Malkki, who enjoys the distinction of being the very first woman to grace the Met’s orchestral podium in it’s entire 137 year history.  One might conservatively say, “It’s about time.”

The vocals for the evening were ably handled by Susanna Phillips as Clémence Tamara Mumford as the Pilgrim, and a powerful Eric Owens as Jaufré, all meeting and surpassing the challenges of the complex score.

Production credits go to Robert Lepage whose controversial Ring Cycle is remembered by Met opera goers. In this production, the entire Met stage is taken up with no less than 28,000 LED lights in parallel rows representing the sea.  Except for the chorus occasionally popping up from between the rows, the principal vocalists are restricted to an odd, mechanical contraption in a cage at the end of a protruding arm.

The giant mechanism moves (carefully) between the rows of the distracting blinding lights. The set then becomes the forced focal point of the production, upstaging the vocalists in every scene.

On balance, the set stands as one of the more unfortunate expressions of scenic design in recent Met memory. Planning to attend? Don’t forget your sunglasses, the score is worth your time.