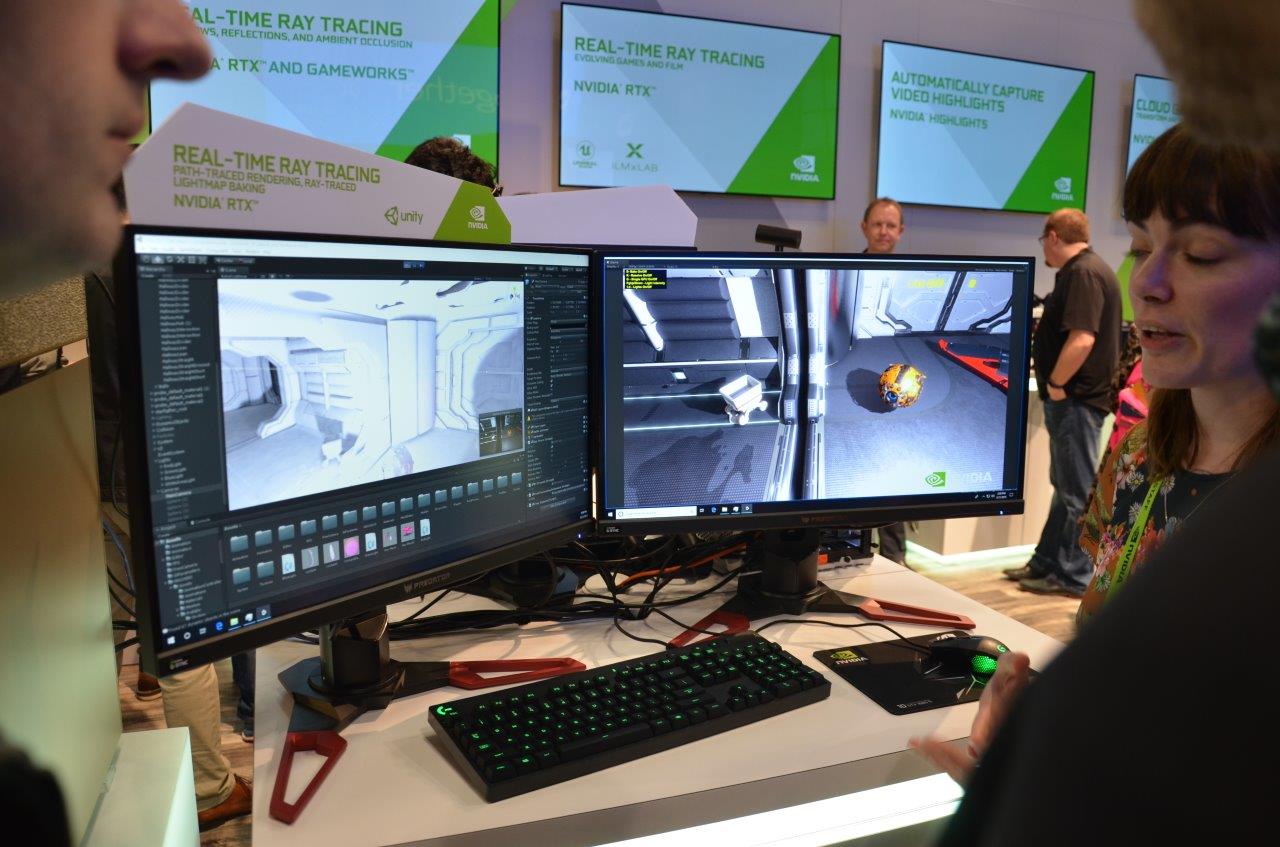 San Francisco, March 25, 2018.   At this year’s GDC 2018 (Game Developer’s Conference), there were a couple of demos that stood out that strongly reinforced my thoughts about the eventual futuristic merging of computer gaming and movies.

After just a few demos on the GDC expo floor,  I was not be able to discern the difference between the computer game graphics and the live action from movies anymore.  Realism for game developers have never looked so real.

On the first day of GDC, NVIDIA announced their latest RTX technology of Real time-Cinematic rendering.  Nvidia’s RTX technology, alongside Microsoft’s new DirectX® Raytracing (DXR) API, has been an intensive work-in-progress for the last ten years.  It’s ray tracing renders lifelike and realistic lighting, along with reflections and shadows that make it nearly impossible to distinguish what is real and what is not, in terms of computer graphics.   It brings real-time, cinematic-quality rendering to content creators and game developers.

Nvidia had Project Spotlight “Reflections” at their booth at GDC, which looks more like a teaser trailer for the next Star Wars feature film, but in reality, it’s a real time tracing demo, which Epic’s team along with ILMxLAB and NVIDIA’s DGX Station, equipped with four Tesla V100 GPUs, Epic’s Unreal Engine and NVIDIA’s RTX ray-tracing technology.

It definitely wowed the enthusiastic GDC crowd as it was hard to believe that there were no actual actors used in the storm troopers costumes.  It was all computer graphics being rendered. 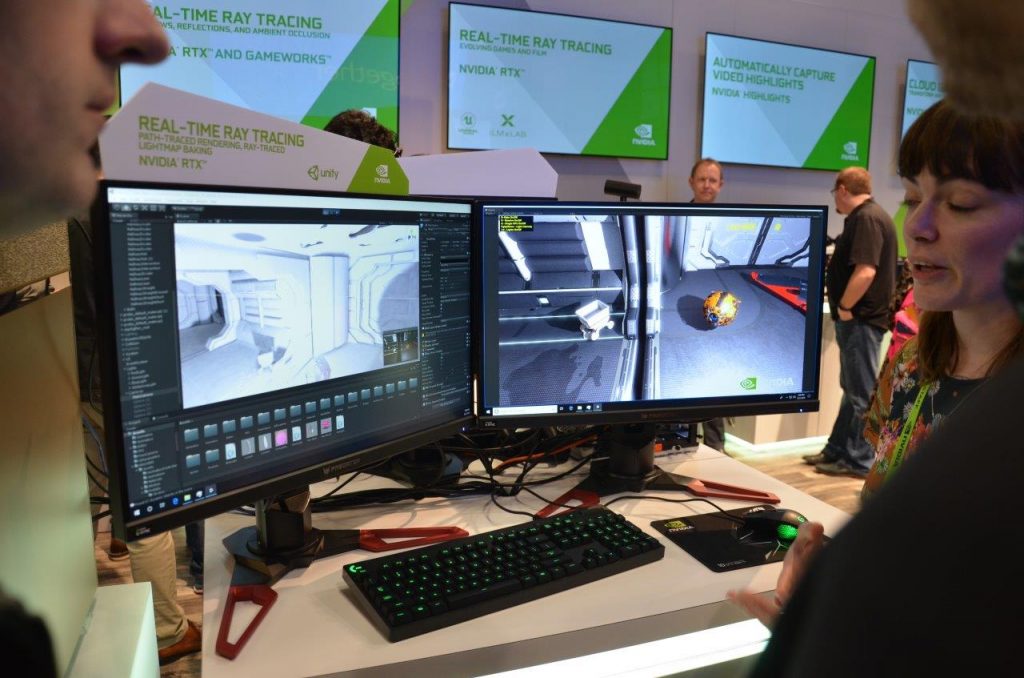 At GDC, game developers will have access to ray-tracing denoiser module, part of the GameWorks SDK from Nvidia.  Photo by Marcus Siu.

NVIDIA has also announced that the GameWorks SDK will add a ray-tracing denoiser module, helping game developers take advantage of new capabilities. This updated SDK, which is coming soon, includes support for ray-traced area light shadows, glossy reflections and ambient occlusion.  This will help save a huge amount of time for creators.

Imagine how the Screen Actor’s will feel after they realize that computer graphics characters may jeopardize their career in the near future.  One of those actors will

Motion capture performance artist, Andy Serkis, known for playing “Gollum” in “The Lord of the Rings” trilogy and “Caesar” in the “Planet of the Apes” trilogy may not have problems finding work.  Just a few sections away from the Nvidia booth, I saw a computer generated “digital” Andy Serkis acting out his lines as his alien creature character was being rendered in real time at the Unreal booth. 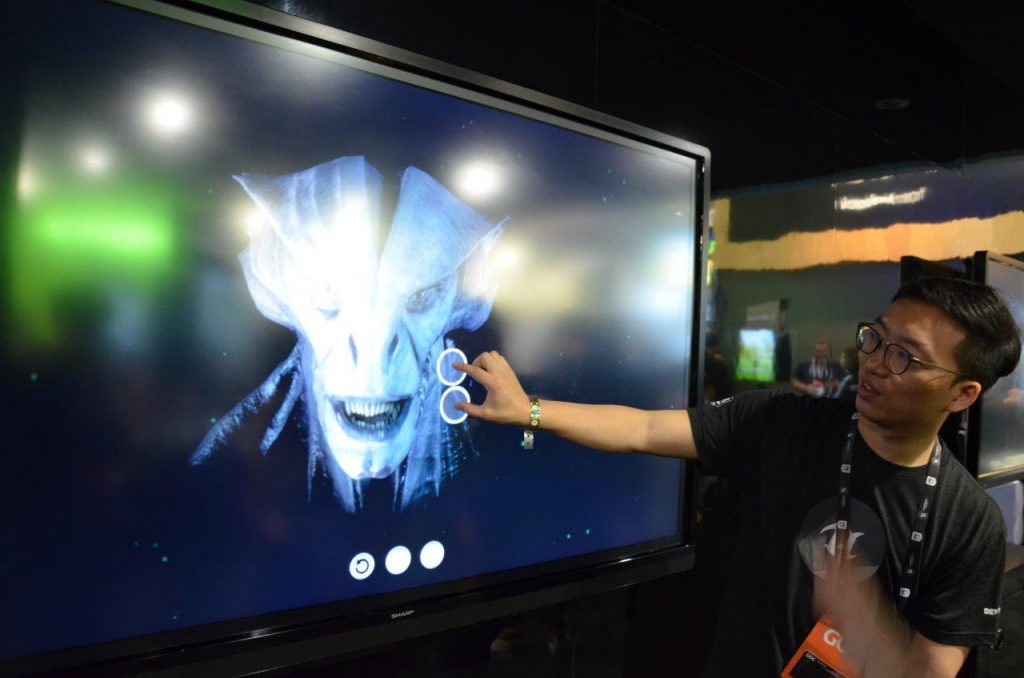 Maybe in the near distant future, we can just get rid of the entire Screen Actor’s Guild with the exception of performance capture or voice-over actors.  Or perhaps one day we can just clone the actors so there wouldn’t be any need for them to come in and perform on a sound stage.

Imagine at the Academy Awards…, “and the nominees for “Best Clone Actor in Supporting Role are”…

In addition with the progress of computer graphics coming from ray tracing in the visual sides, audio will also be just as important for content creators.  End user consumers are continuously looking for an immersive experience with their gaming, so many are reaching out to THX certified equipment for their PC gaming.

THX demonstrated their spatial audio platform, using the latest audio standard, MPEG-H, as well as UHD.  They were using the game trailer for “Helblade”, which ironically, was one of the first live motion capture technology for Epic Games in 2006.  It was in a way, ahead of its time.  Coming from a 2.1 THX certified Logitech speakers and a sub-woofer, it was quite sonically immersive.  I felt that I was right in the middle of the soundscape.

There was also a demo of it using headphones, but I still preferred the speakers. 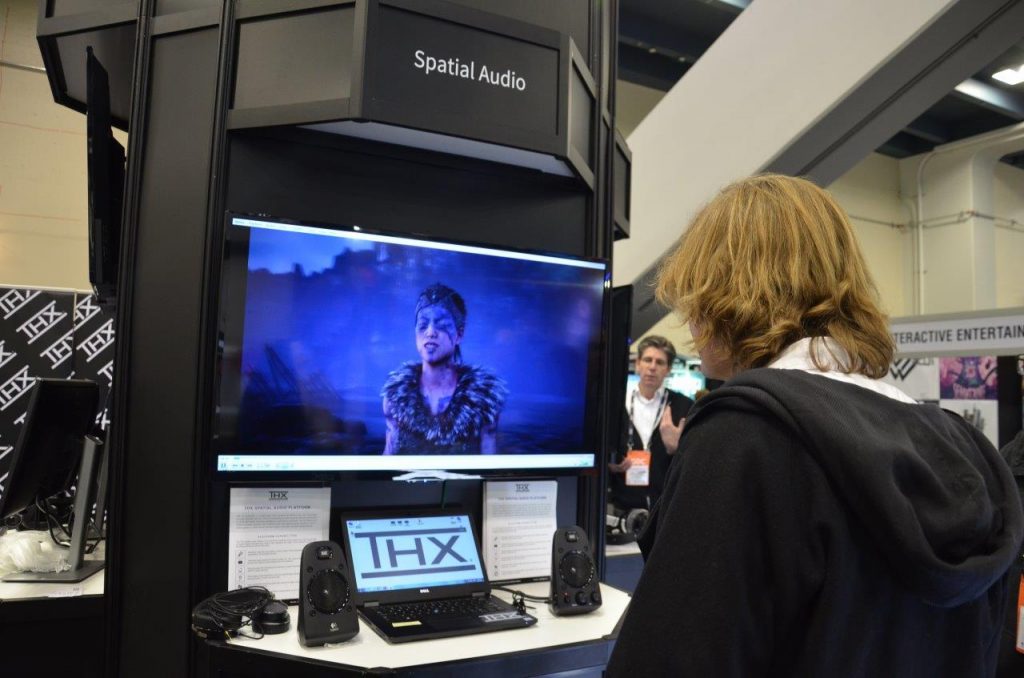 In addition, they utilize personalized audio profiles using HRTS’s (Head-Related Transfer Functions), which are optimized and customized for each listener, based on user’s unique hearing anatomy.

Long associated with the Lucasfilm movie sound in movie theatres in the 80’s, it seems that THX is staging a comeback into the public eye in the marketplace.  In addition to its traditional THX certified products such as home entertainment products over the years, such as projectors, pre-amps, receivers and speakers, they have been gaining momentum into the gaming world by introducing THX certified products, such as laptops, headsets and satellite speakers.

Article and photos by Marcus Siu